The Four Jays Music Company was originally founded in 1955 by the great American composer Harry Warren.  Our catalog contains more than 300 of Warren's published compositions and an additional 600 "trunk songs" which have not yet been released. For licensing information please contact us.

The Music of Harry Warren

The Department of Harry Warren

The Department of Harry Warren was established in the Fall of 2010 to create and promote contemporary avenues for Harry Warren's music via the internet, television, film, live-performance, and theater. It is our mission to convey to the public Warren's personal story, and the legacy of his music through a variety of creative endeavors.

Look forward to the release of our album, Welcome To The Party produced by Nick Page and featuring Ruby Friedman, Jean Paul Riva, Cary Moss, and Rachael Harryman, of Harry's memorable, Way Down South In Heaven, The Lucky Song, It's Fun To Be in London, and Ungrateful Heart. Thrills and chills recording sessions included breaking Harry's own piano in a lively rendition of Want a Little Lovin' recorded by the legendary pianist Scott Healy and drummer DJ Bonebrake.

The David Berger Jazz Orchestra - the acclaimed band featured in the Wall Street Journal, National Public Radio and PBS TV introduces the groundbreaking new album Sing Me A Love Song: Harry Warren's Undiscovered Standards, featuring vocal performances by Freda Payne and Denzal Sinclaire (National Jazz Award Winner). For the first time ever, these previously unrecorded and unpublished melodies by Harry Warren, the legendary multi-Oscar winning composer with iconic hits like Lullaby of Broadway, At Last and Jeepers Creepers, are seeing the light of day with a thrilling big band sound. The CD is available on Amazon here.

All my life I had been subjected to my Grandfather Harry Warren's tirades over the fact that in his opinion no one knew who he was. He felt unseen and unappreciated. It made me feel so sad. I vowed to find out why he felt this way. Many years after he had passed away and I had begun running the publishing company, I decided to investigate the phenomenon of people not knowing Harry Warren and his vast musical accomplishments. What I found out was really quite surprising. So like any other red-blooded member of a  show business family, I decided to write a show. I began in the early years so we could enjoy his first hits of the 1920's such as I Love My Baby, Cheerful Little Earful, and much much more. Since I felt only Daddy could enlighten us on the exact reasons he did what he did, I resurrected him on stage to see him "in-person" to comment on his family, his early life, and his struggle to evolve into the amazing songwriter he became. In the show, he sings, dances, and entertains us with his droll sense of humor and his appreciation of beautiful girls.
Daddy never got over having to leave New York so I am looking forward to our Broadway debut

LISTEN TO THE MUSIC NOW 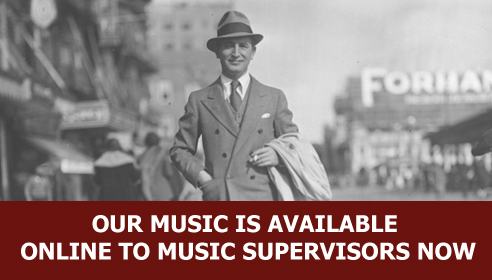